Turning Your Trash into Treasure 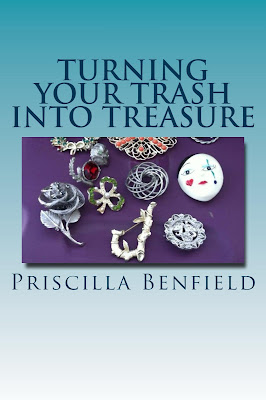 I realized a long-time goal this year when I self-published my first book "Turning Your Trash into Treasure". I followed the rule "write about what you know" when I chose to focus on writing this guide for selling items online. It took me years to achieve but I reached the goal of becoming a top-rated seller on eBay and that helped me to gain the confidence to write this book.

Let me tell you how (and why) I got started selling online. I'm a practical person; maybe too much so at times. I don't like clutter and prefer to live without excess possessions. When my children were growing I made it a ritual that we would go through items like toys and clothing and donate to charity what they no longer needed or wanted. I even tried making some money by having yard sales but never found it worth the effort.


A friend of one of my daughter's gave her a few boxes of items that he no longer wanted. There was an entire box of gay-themed movies. My daughter had no use for these and feeling that it was a waste to just toss them in the trash, I volunteered to sell them on eBay. The response to them was overwhelming and I got hooked on selling on eBay.

We didn't get rich from selling unwanted movies on eBay but we did earn some cash for stuff that was going to get thrown away. I built up a following on eBay and starting going through closets and the basement listing stuff that was just collecting dust. It was a fun hobby that lasted a few months.

Fast forward a few years later and my husband was working at a recycling facility. He was bringing home slightly damaged and some brand-new items that weren't garbage but not really needed by us. I got excited when I realized that I had an opportunity to get back into eBay again. Little did I know that my hobby was going to turn into more than just a hobby when soon after I got laid off from my job.

Selling unwanted items on eBay has helped me to supplement my family's income and it is a "job" that I enjoy. Selling online is not easy and I tried to stress that in my book. I am not rich from selling on eBay but it has helped us get through some tough financial times.

I don't think I know anyone who doesn't have "stuff" that they don't need. We get busy in our day-to-day lives and while times flies, stuff accumulates. Well-meaning family and friends pass off stuff to us that we in turn stick in a closet, basement or garage. Our families grow up and out of stuff and it just seems to multiply, crowding our space. I do believe in donating unwanted items and I do but I also can use the cash so I sell it online.

My book is a helpful, easy to understand guide for the person who wants to earn some cash and clean up! Order my book and if you have questions about how to sell online, send me a message and I would be happy to help!
Email ThisBlogThis!Share to TwitterShare to FacebookShare to Pinterest